Today on the arXiv (arXiv:1609.08093) Camille Bonvin and collaborators (whom I know well from my days in Geneva) rule out the possibility to use the distortion in the gravitational waves chirp signal to measure the acceleration of the universe. They find that the peculiar acceleration is much greater and therefore would (1) wash out the signal from the expansion of the Universe and (2) potentially introduce bias in the inferred parameters for the binary system.

On the Dark Matter front (arXiv:1609.08091), the HESS collaboration (@hesstelescopes, a Cherenkov Telescope array located in Namibia) has used data from an extended array (including a fifth telescope) to close the energy  gap with Fermi-LAT gamma-ray data. Their dedicated Galactic Centre analysis was aimed at investigating the presence (or otherwise) of a reported 130 GeV line in Fermi-LAT data (originally seen with a local 4.6 sigma significance, reducing to 3.2 sigma taking into account the look-elsewhere effect).

The key plot is reproduced below, and it shows that the new HESS 95% exclusion limits (red squares with downward pointing arrows) rule out the 130 GeV line from Fermi (green square).

Another blow for dark matter hunters. 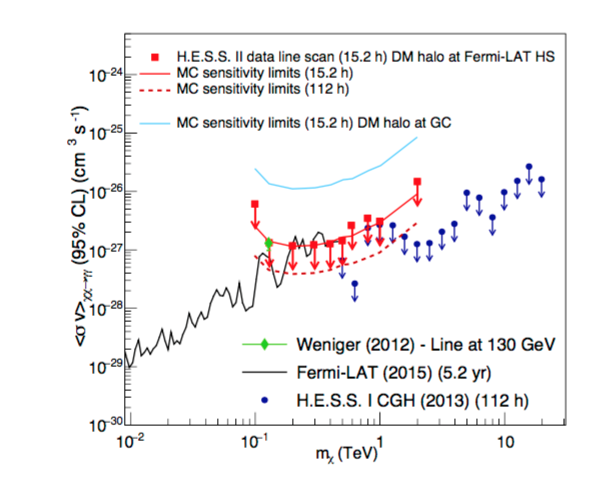 On the supernova front, there is a study (arXiv:1609.08012) about the potential of anisotropy measurements to constrain the anisotropic expansion of the Universe.